My wife has been talking about planting a small garden this year in the raised beds that the previous owners of the house built in the back yard. Today was the day that the plan went into action. I bowed out of the work as I needed to stay inside doing homework so I can pass my classes and keep my GI Bill money. But when I looked out the window and heard the sound of the shovel my sense of duty pulled me outside to help dig out the bed. Then I decided I might need to help lay down the weed barrier and fill the box up with the new soil mixture. I still was able to get some homework done at intervals, but the wife is pretty happy with her new garden bed and usually when she is happy I am happy too. I hope her garden does well.

There are some old birdhouses in the back yard, also left behind by previous owners. I peeked into one of them while we were outside and saw four little baby birds with mouths pointed upward calling for food. I hope that our activity in that corner of the yard didn't disturb the parents so much that they abandoned the nest. Some robins are building a nest in one of our trees as well, and there are plenty of ducks in the canal behind the house. Out of all the birds I think ducks are my favorite. They seem so cheerful all the time. 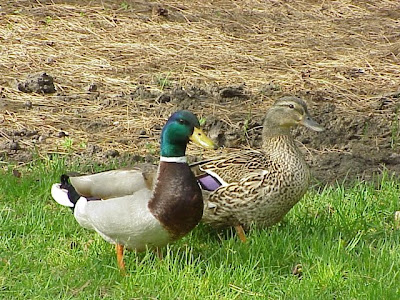 I've finally got my unit of Halberdiers put together. Sometimes posing them is a pain because their halberds extend a fair bit out in front of their bases, so I've got to place them in such a way that the halberd ends weave in between the other figures. The easiest thing to do would be to place them all in the exact same pose in the exact same position on their bases, but I dislike that much uniformity in a mass of troops. To hit 1000 points for my Empire list I've still got to put together a few Flagellants, some Knights, a unit of Handgunners, and three character models to represent my General, a Battle Standard Bearer, and a Battle Wizard. Hopefully I can get that done fairly soon. It's only 31 figures, so it shouldn't take too long. The hard part is that some of the characters are going into the Halberdier unit, so I will have to shuffle them around to make everything fit again. Fun stuff.
Posted by RAZ at 6:30 AM