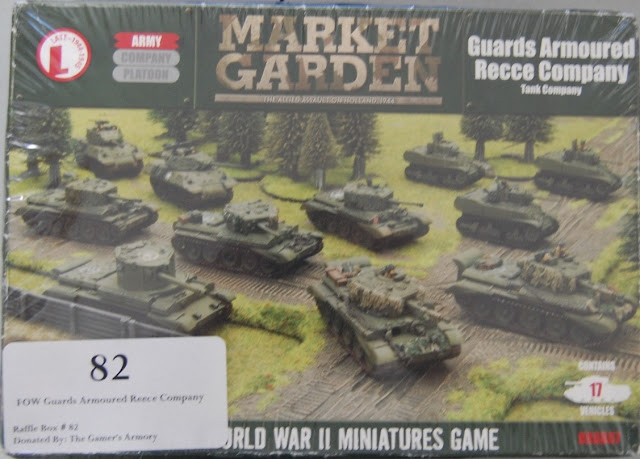 The Gamer's Armory, a game store in North Carolina, recently held a gaming marathon to benefit the Turner Syndrome Society of the United States. I live across the country from North Carolina, so I didn't participate in the event, but I saw on the shop's Facebook page that they were holding a raffle as part of the event. There were a couple of items on the Raffle Wall that looked interesting to me, so I bought a few dollars in tickets. A while later I got an e-mail announcing that I had won a Flames of War Operation Market Garden: Guards Armoured Recce Company boxed set. That was my first choice in prizes and the one that I applied most of my tickets toward, so I was pretty excited about it. Because I live too far away to just stop in and pick up my prize, I sent in a payment to cover shipping and they sent it right out. 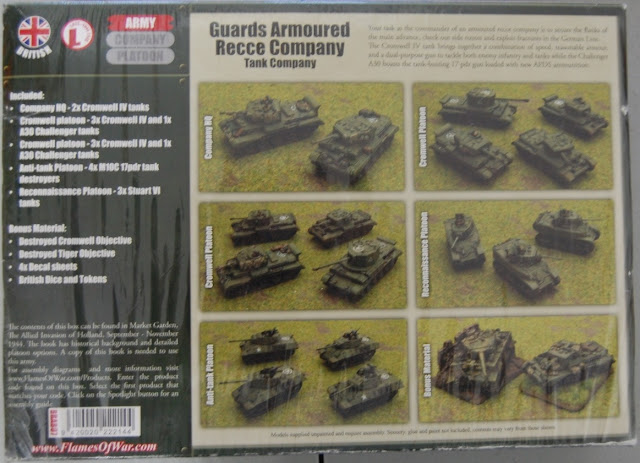 It's a pretty cool item, with 17 vehicles, 2 terrain pieces, and some dice and tokens. I haven't opened the plastic wrap yet. The box makes a lot of noise when I move it around, so I hope that the contents haven't been damaged too much in transit. The box is a little worse for wear, but even if a couple of the vehicles are damaged I still made out pretty well, getting a significant WWII miniature force for the price of a few raffle tickets. Their website says they have raised over $45,000 over the course of 4 annual events, so it sounds like they are doing some good things. It is nice to win a prize, but I didn't mind pitching in a few dollars to a good cause anyway.
Posted by RAZ at 9:05 PM

Email ThisBlogThis!Share to TwitterShare to FacebookShare to Pinterest
Labels: Flames of War, WWII