The guy who lives next to me over here in the desert is a board game fanatic. He plays them, he designs them, he loves them. He works the same job I do, but on a different shift, so we don’t hang out much. He’s recruited a group of people to play a game called Puerto Rico in the evenings, when I am sleeping, but he came in the other day while I was on shift and talked me and the Lieutenant into trying it out. It’s a typical resource management game, with players trying to colonize an island, build infrastructure, grow crops, and ship those crops out for victory points or sell them for money to buy more buildings. I’m sure the website for the game offers a decent summary of gameplay, but you have to balance out all of the different actions you can take and eventually build more buildings and ship more goods than the other players. If you get out of balance with your resources, it is possible for the other players to lock you out for a turn or more based on what they choose to do when they lead a turn off. It seems like an okay game, but I haven’t quite grasped all of the rules or even all of the objectives yet. We may play again sometime soon, if he pops in again during my shift.Here's the game description from the Board Game Geek site:

The players are plantation owners in Puerto Rico in the days when ships had sails. Growing up to five different kind of crops—corn, indigo, sugar, tobacco, and coffee—they must try to run their business more efficiently than their close competitors: growing crops and storing them efficiently, developing San Juan with useful buildings, deploying their colonists to best effect, selling crops at the right time, and, most importantly, shipping their goods back to Europe for maximum benefit.

The game system lets players choose the order of the phases in each turn by allowing each player to choose a role from those remaining when it is their turn. No role can be selected twice in the same round. The player who selects the best roles to advance their position during the game will win.

My sister made a doll of me for my oldest son, so he would be able to have daddy around while the real deal is overseas. It's a fairly common thing to do, and it's generally seen as kind of a sweet memento for the kids to carry around and talk to and act as a place holder. Well, this is kind of like that, except that it's a bit more frightening than comforting. This is me, in doll form: 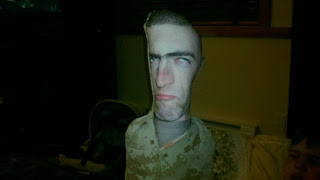 There's no accounting for taste, and my boy has taken a shine to it, so it all works out. The photo she chose is not that flattering, but it is pretty accurate. The uniform is from the wrong service, but my sister's husband is a Marine, so I can let that go. I think it helps my son to get to sleep at night, and after all the trouble we've had with bedtime over the last 2 1/2 years, anything that makes it easier for him to go to bed and actually go to sleep is worth its weight in gold.﻿ I also hear that Miniature Me is serving a dual purpose. Apparently he was using the doll as a makeshift gun and shooting members of the family. It's a good sign. He's got the bloodthirsty bit down; now I just need to teach him to paint and roll dice.
Posted by RAZ at 8:33 AM 2 comments:

Well, Games Workshop is rolling out yet another set of price increases. It probably doesn't rank very high on the scale of world disasters, but it just seems like a bit much. I guess it's good that I have an attic full of figures that need painted. There aren't a lot of things I "need" for my next few army lists that I don't already have, but the cost of a playable army is already more than my house payment (really most armies are close to two house payments unless you can find a good deal on second-hand figures) and that is a lot of cash. I usually make the argument that at least it's not as expensive as some hobbies, but it's getting there.
In other news, I am currently reading book 16 of the Horus Heresy, and after the last few books I am full of ideas for my miniatures. We'll see if I get around to actually doing any of it, but it's exciting to have so many ideas. I haven't touched my paintbrushes for a little while. I got hung up on painting some cloaks and lost my momentum. I would like to get back into the swing of it. I'm also trying to decide if I should do a Traitor Guard army in addition to my Orks, so my Imperial forces have more than one enemy to fight. These Traitor Guard wouldn't be all mutated or anything, they'd probably just deface the symbols on their vehicles and have a different color scheme.
Not much else to report from over here in the desert. I hope the next few months go quickly so I can be home before my kids are all grown up.
Posted by RAZ at 7:57 AM 4 comments: