Last night I attended another D & D Encounters session. It went pretty well, in part because the tiresome guy from last time didn't show up. Actually, he did show up, but he was 20 minutes late and his spot was already taken by someone who paid attention and contributed to the game. My character didn't spend the whole game unconscious and dying this time around, so that was a bonus. He may have done better since I purchased a new d20 just before we played. My nice-looking one rolled two natural ones in a row last week, and I don't feel like I can trust it. I've got the only Level 1 character because I started so late, so I try to keep out of combat and use ranged attacks. I am nearly to Level 2, but that will probably happen just in time for the season to end. Hopefully I can get in on the start of the next season, and have enough time to keep playing with school and work. That's about it for hobby stuff. I would still like to paint up a character model this week, even though there is only another month or so left in the campaign. I learned that the comic shop was bought out by the gaming shop, and while I was in the game store I overheard the employees expressing that they don't know much about comics. That worries me slightly, as I started up a subscription box in the comic shop just before going into the game shop to play.
Posted by RAZ at 2:08 AM No comments:

This past Saturday my sister hosted a Welcome Home dinner for me. It was pretty nice. My mother and most of my siblings were there, as well as some aunts and cousins, some friends, and some other folks from church. It was nice to see everyone and meet some of the people I hadn't before, specifically my third sister's new husband. I made an attempt to connect with each person who showed up, and I hope I was able to make everyone feel that I appreciated their presence. I felt a little silly about having a party in my honor, as this particular tour overseas wasn't all that crazy for me. My jobs were pretty easy, I had a fairly regular work schedule, and there wasn't a whole lot of hardship or deprivation. The hardest part for me was dealing with the people in the unit I was transferred to just prior to the mobilization. My wife had a much rougher year than I did, having to deal with the toddler, the twin infants, and running the rest of the household while I was gone. It will be nice for me to get back to my home unit once my leave is over. I did receive a Joint Service Commendation Medal in the mail recently, from a unit I worked under for the first few months of the tour. It was supposed to be kind of a crap detail, but it turned out to be the best part of the deployment for me, and I got a shiny medal out of it.

Also on Saturday we went to a carnival being held to raise funds for a little girl in our church who has leukemia. Our oldest boy had a pretty good time. He rode on a horse for the first time. We were kind of surprised that he got on the horse without any fuss, as he has historically been pretty wary of livestock. He didn't want to pet the horse, but he was pretty happy to get in the saddle and ride around the block. He really didn't want to stop riding. Later he told my wife that he likes horses, but cows are scary. 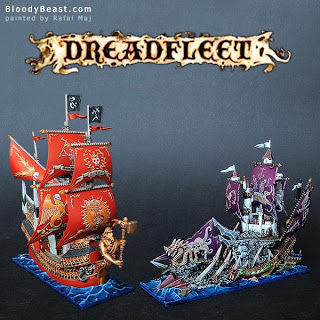 I've seen some very nicely painted Dreadfleet ships on the internet, including these ones. I've also read some positive reviews of the game on various blogs. When it was first announced I didn't have much interest in the game, but I'm warming up to it. I've got a big backlog of stuff to get to on the hobby side of things, but stuff like Dreadfleet and Space Hulk you can just pick up and play. It would be nice to paint up my Space Hulk figures, but it's not entirely necessary. I borrowed the above photo from BloodyBeast.com, which I've linked to in the paragraph. There are plenty of additional photos there. 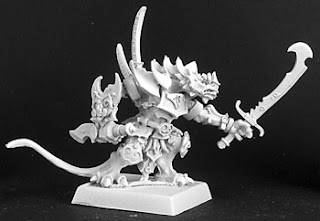 Tomorrow I am planning on participating in another week of D & D Encounters. I had hoped to find a miniature to represent my character, but time got away from me and I won't even have a bare metal figure in-hand, much less a painted one. There is one Reaper figure I like for my Dragonborn Warlock, but I never got around to ordering it. I'm not sure how long the current campaign will run anyway, as I think I've come in pretty close to the end of things. I'll have to think about it. I'd probably have better luck at finding a figure if I picked a more conventional class and race, but that didn't enter my mind when I rolled the character up. 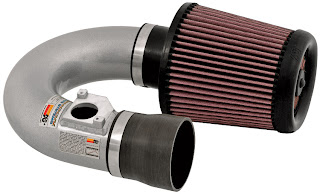 And today I installed an intake kit in my car, which was much less frustrating than I thought it would be. I guess that's a good thing. I didn't even wind up with extra parts! I feel like the intake improves the performance of the car, but it might be wishful thinking on my part. Next up for my car is some new brakes and a windshield. I think I'll let a professional install the windshield, though. I also have some stuff to do on my wife's van, which ought to be fun. They don't sell a high-flow intake kits for minivans, so I just had to settle for replacing her air filter. And at some point I will get around to finding a space in the house for my hobby area and maybe even put some paint on some figures.
Posted by RAZ at 3:26 AM 3 comments:

I've been back home in Idaho for about a week now. The adjustment to back to life at home is going fairly well. I think my oldest boy is pretty happy to have daddy back home, and the twins seem to be okay with me. I've got a few projects going, mostly trying to get some things done around the house. My car has a few things that need done, and there are plenty of things around the house that need taken care of. I replaced the kitchen faucet because it had developed a leak. I moved out of my hobby room while I was home on leave, so I am hoping to clear out a spot in the house to move back into. We are cleaning out the garage, but the temperature fluctuations isolation out there make it less than ideal as a hobby area.
On Wednesday I went to an area games store to participate in the weekly D & D Encounters event. It was all right, and I will probably try to attend regularly. They were running two tables, and I wound up at the table with the younger crowd. The GM was pretty good and a few of the other players were prepared and into the game, but there were a couple of other players who need to develop some more social skills. Perhaps I am growing up into the grumpy old man role, but if you are playing a game with other people, you ought to show up on time, have your papers/pencil/dice/snacks in order and be prepared with your next action when your turn comes around. If your girlfriend doesn't want to play, don't bring her along for the game, because it is a waste of everyone's time for the GM to tweak his scenario to fit in another player, then tweak it back in the middle when she gets up in the middle of her turn and leaves. And no one wants to wait for you to say you're going to the bathroom, only to walk past the bathroom and go outside to argue with her about the game, smoke a cigarette, buy a soda, and decide that your character is no longer named Fluffybunny, he is now Mr. Bojangles. Even the two immature teenage boys were able to name their characters something thematic, track the action, and be ready for their turn. Everyone's time is valuable, and you ought to be aware of that before wasting the time of others. The GM stopped short of inviting the player in question not to come back, but I could tell he was trying very hard to be civil. The vein in his forehead didn't stand out that much during his interactions with anyone else. The other table looked like they were having a lot of fun, perhaps because they were all over 25. One of the guys at that table was an acquaintance from my National Guard unit. I've been away from my home unit for the last year or so, but prior to that we were in the same platoon for a while. I've been shopping around for a miniature I can paint up to represent my character.
On Thursday my wife had to go back in that direction to get some stuff, so we dropped back by the shop to look around. She actually seemed pretty interested in the Dreadfleet game from Games Workshop. I don't know that I will get around to picking up a copy, but I was surprised that she expressed an interest. She also mentioned that we had never played Space Hulk with each other, so maybe we will have to do that at some point. There is a comic shop that just relocated to that same retail complex, so we visited that as well. The guy there was pretty friendly, and he complimented my shoes, which is a surefire way to my heart. Most people don't notice shoes or know that Nike put out Bo Jackson commemorative editions. I may move my comic subscriptions over to that shop so I can support the local business. I will be on that side of town anyway on comic book Wednesday for D & D Encounters, so it will be pretty convenient to pick up my books every week instead of waiting for a monthly shipment.

And speaking of shoes, I saw on Nice Kicks that there is now a release date for the Nike Trainer 1.3 Mid Shield "Rivalry" Army shoes. The site says that they will only be released at very select stores (I have no idea what that means), so I may not be able to get my hands on a pair, but I am hoping I will be able to find a place that will sell them to me without a huge markup. There are other versions for the other branches of service, but I prefer the Army ones. 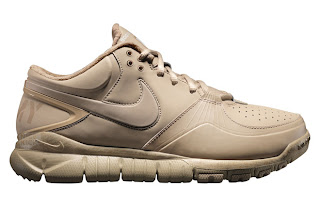