Is It the Shoes?

I've been wearing the same pair of shoes for several years now. I'm pretty sure I bought them when I got home from my deployment to Iraq, so maybe in fall of 2005? My foot is starting to poke out through the side of them, so I am starting the search for a replacement. My wife always teases me because I like shoes that she calls flashy. I guess that's just one of my quirks. I've been looking at these Nike Trainer SC 2010 in the "Baseball Glove" pattern. 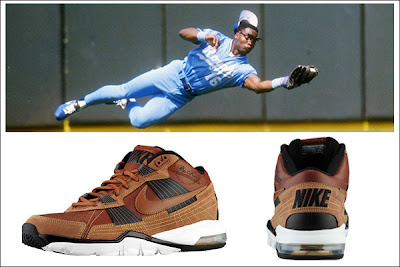 They are modeled after a shoe Bo Jackson wore during the "Bo Knows" ads, and are colored and patterned to look a bit like a baseball glove. They also feature stitching that says Bo Knows 1989. Why the tribute to Bo Jackson? The "Bo Knows" ads started in 1989, the same year the original Trainer SC was released. You can see the shoe from all angles at this post on the Eastbay blog.

I don't know that I will end up scoring a pair. I generally find myself somewhat reluctant to put up the kind of scratch it takes to wear "fresh kicks," but it can't hurt to window shop and dream a little. I know a couple of my uncles are die-hard shoe lovers, but I think they tend to focus more on the Jordans. It is pretty rare for footwear to ignite this sort of fire in my belly, but for whatever reason these ones hit my buttons.
Posted by RAZ at 10:53 PM