I used up some time this weekend to finish assembling my Flagellants and Handgunners. Now all that's left to put together is a unit of Knights, a General on a horse, a Battle Standard Bearer, and a Wizard. Once the 1000 points is put together it's off to the races on painting the dang things. It shouldn't be too bad, assuming I find some time most days to work on it. Here's a picture of everything that's put together so far. The Mortar and the Handgunners provide ranged support. The Greatswords and Flagellants are Stubborn and guard the flanks, the Halberdiers will house the Wizard and the Standard Bearer, who will carry banner that lets the unit reroll morale checks. And the General and the Knights will hopefully be able to charge anything that gets bogged down fighting the Stubborn units in my army. That's the plan at least. I haven't played enough Warhammer to know if it will work the way I envision it.

Here's another view of the infantry line from the front. They look mean enough, I suppose. But there sure don't seem to be enough of them.

Here we've got the Handgunners for the army. You may notice that I've got the Repeater Handgun on the left of the photo and a soldier wielding the Hochland Long Rifle on the right. I didn't actually select either of those upgrades for the Sergeant-type of the unit. I figured that by using both of them in the unit (an illegal combination) my opponent would be able to see that I used them for fluff purposes rather than actual upgrades to my list. I surmised that the Handgunners are made up of a few men who are good shots and got recruited, a couple of somewhat wealthy eccentrics with gadget fetishes who want to try out their Hochland Long Rifle and Repeater Handgun, and a few guys who think that maybe being a Handgunner would be safer than being on the battle line with the Halberdiers, especially on whatever flank is shared with the Flagellants. 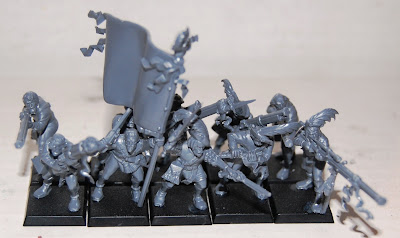 I had a lot of fun putting the Flagellants together, particularly the first rank. Flagellants do not get a full command (Sergeant-type, Standard Bearer, Musician) in the rules, but I modeled my unit to have an approximation of one anyway.

The Prophet of Doom is in the center. He's the ringleader for these folks, and probably had them all will their worldly goods to him before the battle. I imagine being the leader of a Doomsday Cult could be pretty lucrative if you make sure you're the only survivor of the battle.

The musician has got a few bells and a blindfold on. I imagine his music isn't good enough to warrant any in-game bonuses, although his mates might throw themselves a bit harder against the enemy in the hope that they won't have to hear his music anymore in the afterlife. At least it's not bagpipes, right?

The Standard Bearer was a fun model to put together. He's got a pole with a book strapped to it, and on top of that is the flaming head from the Flagellants sprue. I think the head belonged to the former leader of this group. It has shown a surprising resistance to decay and the Flagellants claim that it speaks to them from time to time (the new leader of the group spent some time as a magician and ventriloquist, but they don't know that).

The guy on the far left in the stocks is a particularly sorry case. He doesn't have any weapons and doesn't really want to be here. He joined the group when it was just a discussion group. He recently expressed some misgivings about the direction things were headed and claimed that Doomsday might not be as close as the leadership was predicting. He also resisted willing his goods to the Prophet of Doom. He's being punished and re-educated at the moment by being sent into battle unarmed and restrained. If he survives, it will be proven that he is a thrall of the Gods of Chaos and the group will kill him. If he dies in battle his name will be cleared and his goods will be split up among his "friends." He is hoping to slip away unnoticed and move to a different province. Nordland is nice this time of year... 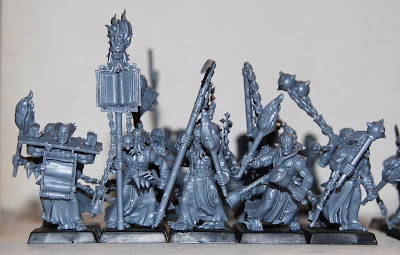 Everyone else in the unit is just your standard robe-wearing, flail-wielding, bearded, frothy-mouthed cultist. They look forward to dying in battle so that their self-fulfilling Doomsday prophesy will come true. I hope they take a few Beastmen with them.
Posted by RAZ at 6:30 AM