Progress and a Rant About the World of Warcraft TCG

I made a little progress on my Battle Standard Bearer today. I've got a lot of stuff blocked out and I should be able to add highlights and shading pretty quickly. I'm pretty pleased with the way he's turning out.
I ran into some trouble today when the severed hand broke off, but it glued back on with no problem. I think it broke because the standard bearer was one of the first plastic models I put together, and all of those were put together with superglue. I think it was even the cheap superglue. Most of my breakages so far have come on those first models I put together. Whenever I have a breakage, I put it back together with plastic modeling cement, so I should have fewer problems as time goes by. 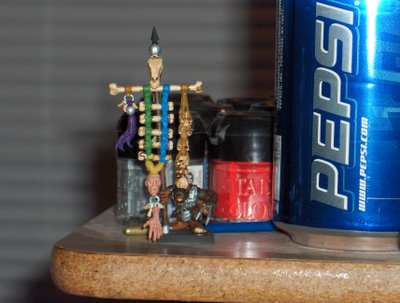 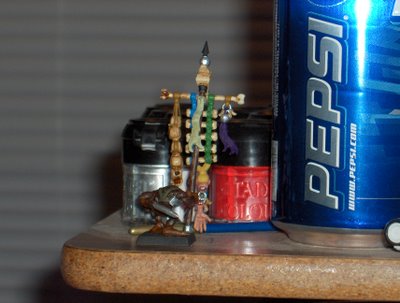 My wife got her starter deck for the World of Warcraft TCG today. The decks are random, and she pulled a Night Elf Resto Druid with Herbalism and Alchemy, which is the exact character she plays in the online game. I think she is pretty excited about that. I pulled some sort of Priest deck, and I think I'll just end up buying a preopened Hunter deck online.

The Limited Edition Raid deck is supposedly sold out already. You can find a few on eBay, but I imagine we won't be able to afford one. All of the stuff Upper Deck is doing to lure players of the online game into the card game seems to me to be geared too much toward the hardcore TCG player. The Raid deck was apparently printed in too few numbers for any casual gamer to get one at MSRP. The loot cards which seemed so cool at first are packed so rarely that no casual player is going to have much chance to pull one. And the points cards aren't worth enough to ever earn anything good. The Ogre costume trinket costs something like 50,000 points. With each pack being worth 100 points, you'd have to buy 500 packs of cards just to get a stupid costume trinket. The local shop sells packs for about $4, so you're looking at spending $2000 just so one of your online characters can dress up as an Ogre sometimes. And even the unique firework trinket is 25,000 points. No one ever looks at fireworks that people set off in-game, so why would you spend $1000 to have one of your characters do it? The whole thing seems like a rip-off and I don't even know if I want to support the thing at all. I think they could have done a lot better by the fans of the game and I hope the whole thing crashes and burns. If it does, maybe the cards will become cheap enough to actually do something with.