I am very close to finishing the unit of Clanrat Slaves I've been working on this week. I just have to do some highlighting and a couple of small details. Today I did a couple of ink washes and painted noses and tongues, for those that have open mouths. So far they have turned out how I intended.

When I first started working on the unit, I considered painting them a lighter brown than my other Clanrats, or maybe even grey, but I couldn't really get a good color that I liked and I was using most of my light browns on the armor already. I didn't want to end up with armor the same color as fur. I decided it would be all right to paint them the same color as my other Clanrats because according to the fluff, Clanrat Slaves are basically Clanrats that have been captured in battles between Skaven armies. So, the Slaves would basically be just Clanrats from another tribe.

I wanted to paint them with duller armor and weapons to distinguish them as the lowest of the low. I picture Skaven as being very much like regular rodents. They like shiny stuff and status might be based on how much shiny stuff you have. The Warlord would get the shiniest stuff, the Stormvermin would get what he didn't want, the Clanrats would get the leftovers from the Stormvermin, and the Slaves would get whatever scraps they could find. I decided to use a lot of dull brown colors on the Slaves armor, and to tie them in to the color scheme for the army I threw in a couple of my duller green colors. I block painted everything in my five armor colors and when it came to shading I got really lazy. I used the same green ink wash for all of the green colors and the same brown ink wash for all of the brown armor and all of the fur.

I took a couple of pictures of them as they are now, which I will post. I stood them next to a unit of regular Clanrats for comparison. 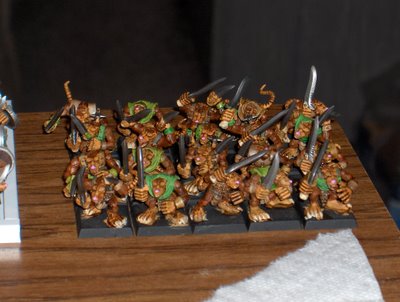 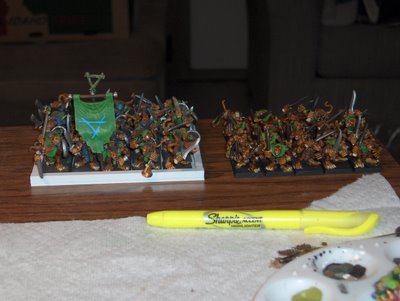 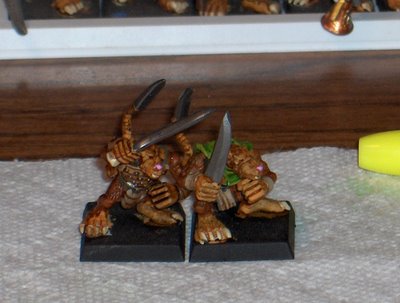