I've been slowly working on painting some of my Jezzail teams, but it is going slowly as I can't seem to keep working for long periods of time. I may need to paint a pirate or some Warlord figures to recharge a little from painting ratmen. I am done with almost everything on them except for the metallic parts. I am not really a fan of most of the metal Skaven miniatures so far, as they have endless amounts of tiny little fiddly details that take forever to paint. I finally had to stop painting today because I couldn't squint at the little bands on the gun barrels anymore. Hopefully I can finish them up after work tomorrow and then I'll just have one more Jezzail team and the Warp-Lightning Cannon to paint. Then I'll have to do the bases for the army and be done with Skaven for a little while. 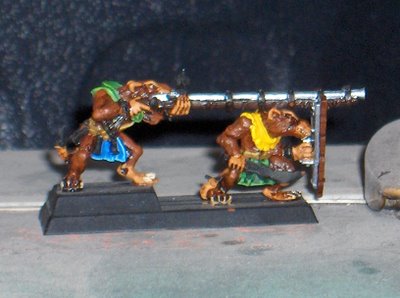 I've also been trying to find some enjoyment in World of Warcraft, as it seems I am the only person in my immediate group of friends (all five of the people I know, who all happen to be related to me) who is not excited about the game. I played for a little while yesterday "helping" my little brother level up his Orc warlock. I had to start a new character to help him out, though, as his Warlock is on a different server than my characters. He was at level 6, so I'm not sure how much my level 1 Warrior really helped him out. I think that once my wife starts her World of Warcraft account back up I'll be able to enjoy the game a little more, as we can go quest together in some of the high-level areas and work toward goals other than the end-game sets and dungeons. The expansion is supposed to come out in mid-January, so then we'll have another continent to quest and grind in. And I still need to grind out about 100 more gold that my sister and brother-in-law lent me to buy a Core Marksman Rifle. I would also like to get my full tier 0 set, but that would require going into a few dungeons and instances that are somewhat time-consuming. And who knows what they'll come out with for the expansion? The tier 0 and 0.5 sets will probably be obsolete in a few months.

The neighbor has been trying to start his truck for about two hours now. I don't think it's going to start. He just had the starter going for about 35 seconds. I don't know much about cars, but I don't think keeping the starter going for that long is good for the vehicle. I'm sure he's not thinking about that at the moment, though. It sounds like he's hit the overwhelming frustration and anger stage of car repair. I hope he doesn't keep it up for too long, as I've got to wake up in about four hours for work.