I finally finished off my Space Marine squad, so in the first half of January I've already accomplished nearly 50% of the painting I did in all of last year. Not a bad start; we'll see if I can carry momentum through all my upcoming obligations. I do think I'll try to paint the Predator next. The picture below shows a couple variants of the Terminator. I'll probably be doing the one on the right side of the photo. It's got an Autocannon and sponson-mounted Heavy Bolters as opposed to the Lascannons on the other one. 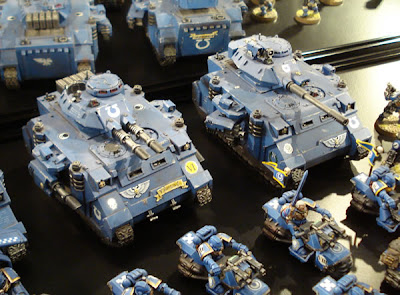 Hopefully that will go together well. I will possibly open the box up and look at the parts tomorrow. No pictures of my completed Space Marines as the cameras aren't nearby at the moment.

There is a new creature residing in our home now. There are quite a few regional Yahoo! Groups that go by the name Freecycle. Basically, people within a specific area join up and post stuff that they no longer need, and other people can e-mail them and arrange to haul it away. You can also post requests if there is something you are after. The catch is that no money changes hands. You're not allowed to sell the stuff you post. There are usually so many useless posts that I don't pay them much mind, but last night a message popped up offering a Russian Tortoise that the poster's kid no longer wanted to take care of. We'd been wanting to give Owen (our original Russian Tortoise) a companion for a while, but they aren't an extremely cheap animal to buy, generally around $80. So I e-mailed the lady and arranged to go over there after work and check it out. In order to take the tortoise I also had to take his cage, an extremely heavy 6-foot long enclosure. So I now have a huge terrarium in the back of my truck that I really have no need for. The tortoise doesn't have a name yet. He wasn't being fed proper vegetables or the mineral supplements he needed nor was he getting the UV light required for synthesizing his nutrients, so his shell is a bit malformed and I think it had a couple of soft spots. It should start to heal up and harden now that he'll be eating properly and basking under our UV lamp. Also included was a nice artificial pool/water dish that sells for $40-60 at the pet store. So it was a pretty good deal all around for us.

That's about all the news from me for today. It's exciting to be making some progress on my miniatures, hopefully I'll have more good news to report soon.
Posted by RAZ at 11:31 PM