Voted Off the Island

Last night I finally fell asleep around 3 am and woke up to a coughing fit at 5 am. Somehow I managed to drag myself out of bed, perform personal hygiene, get dressed, pack my backpack, and go to work. After 45 minuted my coworkers decided I was too sick to be at work and voted to send me home, which is really where I wanted to be anyway. The only reason I didn't call in sick is that I am out of leave, so taking time off work means coming up short on the next paycheck's bills. On the way home I picked up some medicine and once at home I e-mailed my professor to request an excused absence and laid down for a quick nap. When I woke up it was 5 pm. So I did some reading for school and here I am. The lack of sleep last night and the long nap today means that my sleep timer is way off. Hopefully tomorrow morning my cough will be cut back enough that I'll be able to perform my duties at work without distracting my coworkers. I feel a lot of guilt about missing time because our timeliness deadlines mean that someone else has to pick up my job. I don't like it when it happens to me, and I don't like having my job pushed onto others. I realize that this isn't the most riveting drama, but it's all I've got. 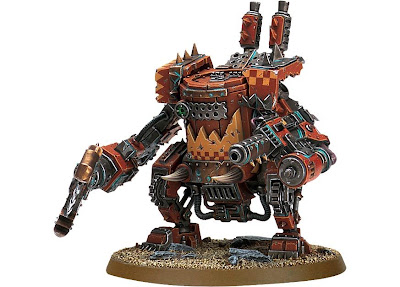 Games Workshop has released pictures of some upcoming models. There is a plastic Ork Deff Dread, a box of three Killa Kans (the models pictured here) in plastic, a Space Marines Venerable Dreadnought, and updated kits for the Imperial Guard Basilisk and Chimera. There's also a metal Ork Flash Git figure and a book of missions for 40k. The best value in this group seems to be the Killa Kans, which come in cheaper than the previous metal version. Some people have worried that this box of three is a limited-offer thing, with the three Killa Kans to be later packaged individually at a higher price point. A brief look at pictures of the sprues looks like you might be able to make on Kan from each sprue, but I don't know how they'd package it so that you could be sure to get the weapon options you wanted for a particular model. More likely is that Games Workshop would just bump up the price of the 3-pack whenever they do their price adjustments. 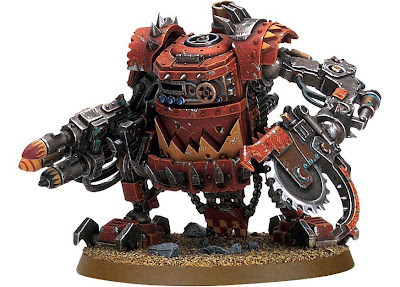 I seem to have hit a minor lull in my coughing, so I think I'll try to get to sleep before it starts up again.
Posted by RAZ at 11:17 PM