I've been slapping some paint on a squad of Black Reach Space Marines. I am moving at a fairly rapid pace compared to my usual standard. I think it's because I actually have the prospect of playing a game in front of me and because I am trying to do a good-enough job rather than really sweat all the little details. I don't want to get bogged down and fail to get my army painted in a timely manner. When they're done they should look something like this: 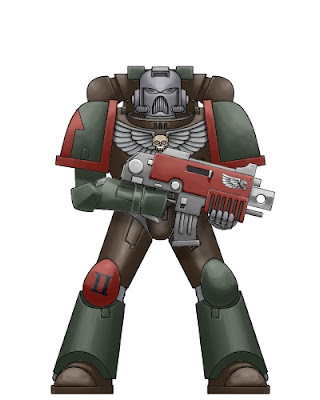 I've been thinking about the Space Marine army list and codex. The army as laid out in the fluff and game rules seems to be missing a middle level of command. There is a big gap between the NCO squad leaders and the Company Captain. When you build an army you have to take one HQ choice and two troop choices. In choosing your HQ choice you are limited to taking Chapter-level officers or your Company Commander. That means that you're taking at a minimum your Company Commander on every little patrol your unit does. If two squads go out to investigate a blip on the radar they're taking their CO or one of his superiors with them. There needs to be another level of command in there, perhaps 4 Platoon Leaders or Platoon Sergeants. That way in each Battle Company you'd have two leaders each in charge of three Tactical Squads, a leader for the two Devastator Squads, and a leader for the two Assault Squads. The reserve companies might be able to get by with fewer mid-level leaders. I think I will assume that my HQ chooice in low-points games is some sort of mid-level leader who is not represented properly in the fluff. I suppose it's a bit silly to argue about the command structure of a fictional army, but it was on my mind.

Blizzard was offering a free 10-day trial of the new World of Warcraft expansion, so I signed up to see what I'm missing. So far I haven't really been able to get into it at all. Maybe I've finally kicked that particular obsession. I find myself logging off after a few minutes in order to go do other things.

I found a miniature to represent my D & D character. It's from Reaper's Dark Heaven line. It's not perfect but it's about as close as I'm going to find. My main problem with the figure is the horns. They look a bit odd. 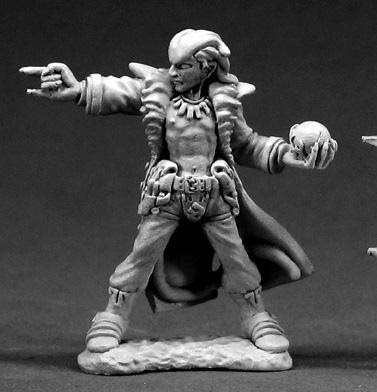 Merry Christmas!
Posted by RAZ at 4:19 AM