I made a little more progress on my Space Marine squad over the weekend. They still need some details and highlights painted in, and I haven't even touched the sprues with their backpacks and weapons yet. I don't know that I'll be able to get them finished before school starts next month as I will be gone most of January doing army stuff. At least I'll have a good starting point when I get some free time again. I still haven't figured out the new camera, so there is some flash and glare in the photos. I tried not using the flash, but the figures wound up being too dark. I probably just need a different lighting setup on my desk. The Terminator is just in the photo as a comparison.

You may notice that the Terminator does not have all the red highlights that the Tactical Marines do. According to the fluff, the Terminator armor belongs to the 1st Company of a Chapter, while I've chosen to have this squad of Tactical Marines be part of the 3rd Company. The colors of 1st Company are traditionally silver/white, which can be seen on the Terminator's little shoulder shield. The color for 3rd Company is red, which can be seen on the shoulder trim and right kneepads of the Tactical Marines. I'll probably continue to build my Marines as members of 3rd Company with proper attachments from 1st Company and 10th Company. The 10th Company is traditionally made up of Scouts and does not have a color, as the Scouts haven't achieved full status with the Chapter and thus don't get their own heraldry. At least that's how I understand it. I am by no means a master of any game system's lore; I'm really just going by what's in the front of the army book. 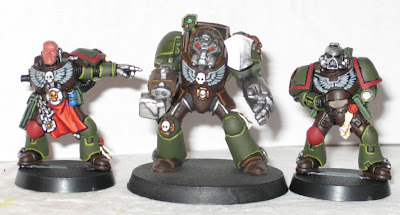 Not much else to talk about, really. About two months ago I ordered a subscription to White Dwarf. It had been confirmed that the cover price had been raised by $2 per issue and that the price for subscriptions had also been raised, but I noticed that the subscription price on the website hadn't been changed to reflect the price increase. I wondered to myself if Games Workshop would honor the listed price, so I made my order and paid with a credit card through Paypal. The Paypal page for the transaction said "awaiting merchant action" for two months and then out. The Games Workshop order page said "awaiting merchant action," and it still does. I got a confirmation page in the mail from Games Workshop about a week after I made the order. My credit card was never charged. I figured that I had made my order in the limbo between the price change announcement and implementation, so Games Workshop had just ignored it and let it time out. But today I opened the mailbox and found a copy of the January White Dwarf, which I had already purchased at the store in the belief that my subscription had not gone through. The little address block indicates that I have 14 issues left on my subscription. I'm going to contact Games Workshop tomorrow and find out what they want me to do. I'd be happy to pay them their money as I don't want to be a cheat, so we'll see how that goes. And for further reference, if Games Workshop announces a price increase, don't try to beat it with a preemptive order.
Posted by RAZ at 8:29 PM