I worked on Space Marines on and off throughout the day. My wife was very awesome and pretty much gave me the whole day to sit around and fiddle with my hobbies. I think she sensed that I'm a bit stressed out about going back to school and soon being the sole breadwinner in the family, as well as a few other things we've got going on throughout the next year. So it was nice to have a day with very few demands aside from putting paint on figures. Due to schedules we will be doing the traditional Christmas stuff at my parents' house tomorrow with all of my siblings and their families, as well as my Grandma. Back to the Space Marine squad, these pictures are rather terrible, but the figures are coming along nicely. 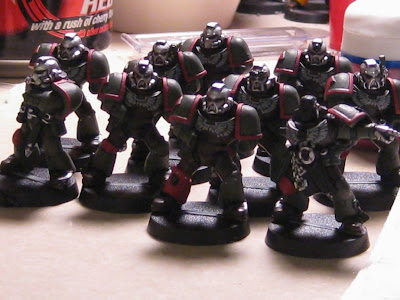 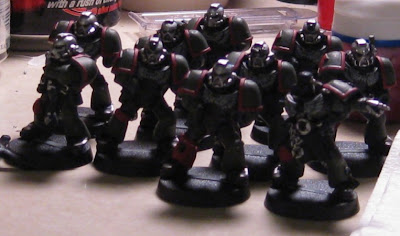 I also got the Games Workshop newsletter in my e-mail today. The newsletter included some pictures of a new Ork Stompa model that will be released in Spring 2009. It is a huge model, the profile for it can be found in the Apocalypse rulebook. I'm not sure that I'll ever have a need for one, but some of those new Super-Heavy plastic kits from GW are pretty neat-looking. I am still pretty excited for the Ork Battlewagon that releases in January and the Stormboyz that release a little later in January. I'd post the pictures of the Stompa here, but I haven't seen them pop up on the web anywhere else yet and don't want to be the first one to get crushed by the cease and desist hammer.

I got in a little bit of World of Warcraft in between painting. I just can't really find the fun in it anymore. I've tried, but the feeling I get is similar the the way I feel when watching TV. I spend much of the time thinking about the other things I could be doing. So I don't think I'll be pumping out the fifteen dollars a month to keep the subscription going after this free trial runs out.

I've also been listening to a couple of podcasts recently. I think I've mentioned them all here on the blog before. First is The D6 Generation, which comes out every two weeks or so and covers a wide range of games, from board games to miniatures and a little bit on the RPG side. The other is 40k Radio, which only covers Warhammer 40k and is possibly slightly less family-friendly than The D6 Generation. 40k Radio is a weekly podcast. For the month of November they spent most of each podcast going over the Tau army list and the various options that one could use for a Tau army.
Posted by RAZ at 2:10 AM