I took most of the unpainted miniatures for my Skaven army out to the shed today and primed them. I also made two more movement trays for the Slave unit and the Clanrat unit. The Clanrat standard bearer kept falling over, so I filled his base with steel shot and glued it in to make him a little less top-heavy. Then I lined the whole army up for this picture. All that's missing is one Jezzail team and the Warp-Lightning Cannon. I am excited to be this close to finishing the project, as I'd really like to have it done by the end of the year. The only trouuble is that by painting so rapidly I may be jeapordizing my lifespan. They say that a wargamer cannot die as long as he has miniatures left to paint, so most wargamers accumulate enough lead to ensure their survival. I'm running on slim pickings right now and will have to make a large purchase soon to ensure that I will live through 2007. 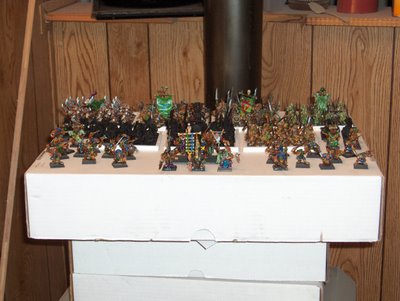 Our ball python has graduated to eating small rats, which is somewhat exciting to watch. We had been feeding her three mice at a time, but now it appears she can kill a rat without being harmed, and that is good news. Rats may be vile, smelly creatures, but they are not nearly as vile or smelly as mice. 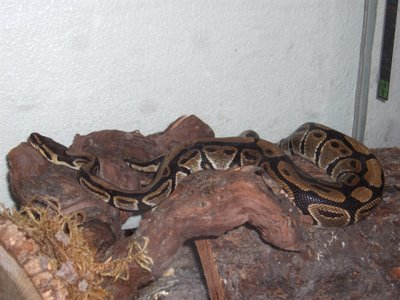 I have recently become obsessed with a magazine called Keith Martin's Sports Car Market, which features high-end collector cars, especially older cars. The most interesting section for me is their auction reviews, in which they go to major car auctions and review each sale to see if the buyer got a good deal. It's sort of like watching Antiques Roadshow or something to see if the people who bring stuff in have a hidden treasure or a piece of junk. Most of the cars in the magazine are worth more than my life, but it sure is fun to read about them. One interesting article this month analyzed the costs of owning a Ferrari. The car in question ended up costing something like $10.40 in maintenance for every mile driven over the course of several years and 36,000 miles.

And finally, to address the elephant in the room, my dad has plans to take me down to Chinatown. I'm not sure what that means, and I'm not sure what his plans are regarding the truck. I could just call him up, but the cat and mouse on the internet is interesting enough to keep me busy until Thanksgiving. It seems that the man who sold the truck to my dad has found my blog. I'm not sure if he is one of the people who my dad enlisted to help take me down to Chinatown or if he just stumbled onto my blog by accident (highly improbable), but when two officer-types get together, anything can happen. I did pick up a Hot Rod Magazine special issue on body and paint work, just to see what it's all about, as I think I've mentioned before that my automotive knowledge is quite limited. It looks like I can do a lot of the work myself, which is good, since I probably have more time and energy than I do money to pay someone else to do it. Besides, what's the point of doing a big project if you have someone else do all the work? It's like paying someone in China to level up your World of Warcraft character so you don't have to put in the time to have your level 60. But the main point of all this is that I have no idea what my dad is planning.