I saw an interesting photo from the French White Dwarf magazine on the Dark Future Games blog. It looks like Games Workshop is going to produce a Mangler Squigs model. I've seen the photo in a couple of other places as well, like the Warhammer Fantasy Battles Tabletop Gaming blog. It looks like the model will be Finecast, and also much larger than I imagined. I pictured Mangler Squigs as being a couple of normal-sized Squigs with some chains and an unlucky Night Goblin handler, but it looks like these Squigs are huge, and no less than five Night Goblins have been tasked with keeping them pointed toward the enemy. I really have no idea what all I've got in the attic, but I'm pretty sure I've got most of the figures for my planned Night Goblins and Squigs list. This will probably be a must-buy for me at some point down the line. Much of the list features random movement, so it will probably be quite silly to play with. Just point everything at the enemy and off they go! 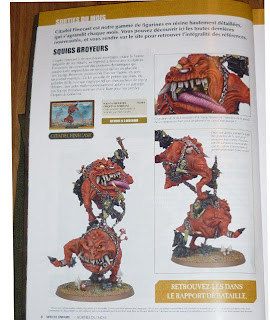 I dug out the Dwarf army I worked on while I was overseas because I needed to get at my paints. My pot of Chainmail paint exploded during transit, but I anticipated such an event and wrapped the figures in plastic before I mailed them, so the only damage was that a few of my other paint pots got a nice silver paint job. At some point I will go upstairs and take some pictures of the Dwarf units I've finished so far. They might make a good rival for the previously-mentioned Night Goblins and Squigs army.
I made it to D & D Encounters this week and had a pretty good time. My Barbarian has a habit of never hitting anything the first time he swings his axe at it. But I still killed my share of bad guys and took at least my share of damage. And I even got a wondrous magical item for asking a magical hallway the right question. Today I went and got some basing material and varnish for my figures. I did forget to pick up some Badab Black wash, but I think I have enough to get me by. Oh, and I got some Grey Knights. I may even paint them. I meant to work on assembling them tonight, but that hasn't panned out so far.
I also ran into my cousin and his wife at Hobbytown today, which was a nice surprise. I don't get out much socially, so it's good to have random encounters with people who I know. Oh, and I turned 30 a couple of days ago. So far it's not much different than 29.
Posted by RAZ at 10:28 PM