I forgot to mention that pictures of this upcoming release from Forge World have popped up on the blogs. I believe the model was on showcase at the UK Games Day 2011. I pulled the picture from this post on a Space Wolves-specific blog. I think it looks like everything a Space Wolf should be, with the fur, the big hair, the big axe, and a big helping of feral rage. I may not wind up getting one, but it's pretty to look at. 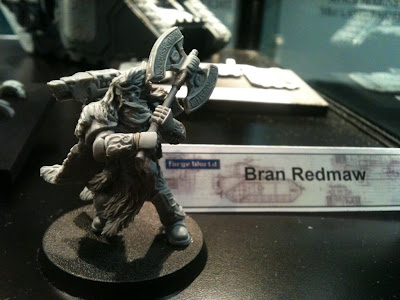 I've also been eye-balling the Contemptor-pattern Dreadnoughts that Forge World has been putting out. At current conversion rates the base model, two weapon arms, and shipping comes out to just over $80, so that takes some of the steam out of the sails. Even the prices on the regular Games Workshop models have given me pause as of late. After the most recent price increase and the release of Finecast Failcast, I have pretty much just stopped buying GW models. The price increase before that one really caused me to slow down on hobby purchases, but this latest one just went too far for me personally. I know the ire over the move has already flared up and dropped to a simmer, but for me at this moment I am likely to work on what I have and hold out for good deals on second-hand stuff.
There is a miniatures gaming convention called Tactical Solutions in Spokane, Washington that I've flirted with attending every year, but it seems like I always have a military commitment on the weekend of the event. It is kind of looking like I will be home by the time it kicks off this year, so I began making tentative plans to go. Then my wife reminded me that my sister is getting married on that Saturday. Curses! It looks like I'll be spectating from afar for at least another year.
Posted by RAZ at 11:04 PM